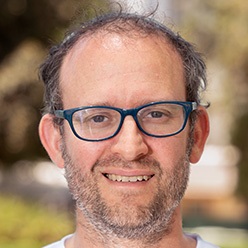 Yossi grew up in the Reform movement in Britain and is a proud graduate of Netzer (The International Reform Zionist Youth Movement). After graduating Machon L'Madrichim, he studied politics and philosophy at the University of Glasgow and spent summers studying at the Conservative Yeshiva. After his Aliya in 2006 he attended Yeshivat Darche Noam and Yeshivat Yesodei Hatorah and went on to serve in the Ordinance Corps of the IDF. As well as being a licensed tour guide and working in the Western Wall tunnels, he has worked on numerous archaeological sites. When he's not increasing his knowledge of the land of Israel he's probably cooking, baking, playing the guitar or trumpet, or wrestling with his three boys. Yossi lives in Jerusalem with his wife Sarah and children.