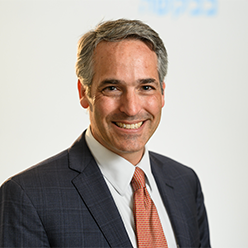 After graduating with a B.A. in History, Michael quickly came to Israel and spent many years studying at Yeshivat Hamivtar in Efrat, where he received rabbinic ordination.

Over the past eight years, Michael has been the Director of Jewish Student Connection in Denver, CO involved in Jewish education in both formal and informal capacities. He is passionate about helping people develop their own personal connections to Judaism, the Jewish people, and Israel.

During his years in Israel, Michael met Ariella, raised in South Africa and Australia. Where else would a Jewish guy and girl from different continents meet? Michael and Ariella have four children - 3 boys and a girl - who were born in Israel, Texas, and Colorado.

While they had enjoyed living in Colorado, the Sunshines are thrilled to have returned to Israel in August of 2018 and Michael is excited to continue his passion for Jewish education and connection at AMHSI.