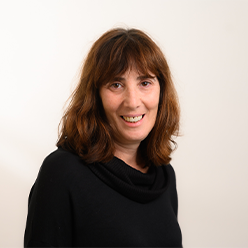 Hila Naftalovich graduated from Hebrew University in Jerusalem, where she earned a BA in education and sociology.  Her decision to enter the world of education was a direct result of her military service wherein she served as a commander of the officers’ course and as company commander. Upon completing her education, Hila worked in Jerusalem’s School of Excellence high school as a resident advisor and counselor, as a guidance counselor at Bar-Ilan College in Ashkelon, and later managed the registrar at Emek Yezreel College. In 1998, Hila moved with her family to the United States, where for eleven years she led the Hebrew Department at the SAR High School in Riverdale, New York.  Hila studied second language teaching and acquisition at Hebrew College in Boston. Hila mentored teachers in many schools in New Jersey teaching Hebrew as a second language. In 2016, Hila returned with her husband and five children to Israel and before joining the AMHSI family as the Dean of Education, was the founding Associate Principal of Zarkor, the first private, English immersion school in the country.