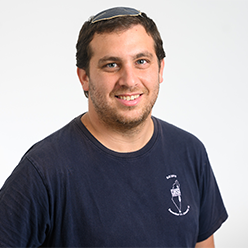 Doni Kandel was born and raised in Los Angeles. After high school, he came to Israel for a year and a half of yeshiva and decided to stay for good. He spent many years in informal education, as a participant, and later, West Coast Director, of the Zionist youth group Bnei Akiva. He was also a camper, counselor and Assistant Director of Camp Moshava Wild Rose in Wisconsin. He holds a BA in Political Science and Military Strategy from Bar Ilan University and an MA in Counter-Terrorism and Homeland Security from IDC Herzliya. He has worked as a journalist for both Israeli and American publications, and, after a brief stint in the high-tech scene, found his passion for teaching, as a general studies teacher at AMHSI. He taught History, English Literature, Sociology and Psychology. In 2016 he was added to the Israel Studies staff and is thrilled to share his passion for the people and the land of Israel with his students.

He currently lives in Mazkeret Batya with his wife and daughter.