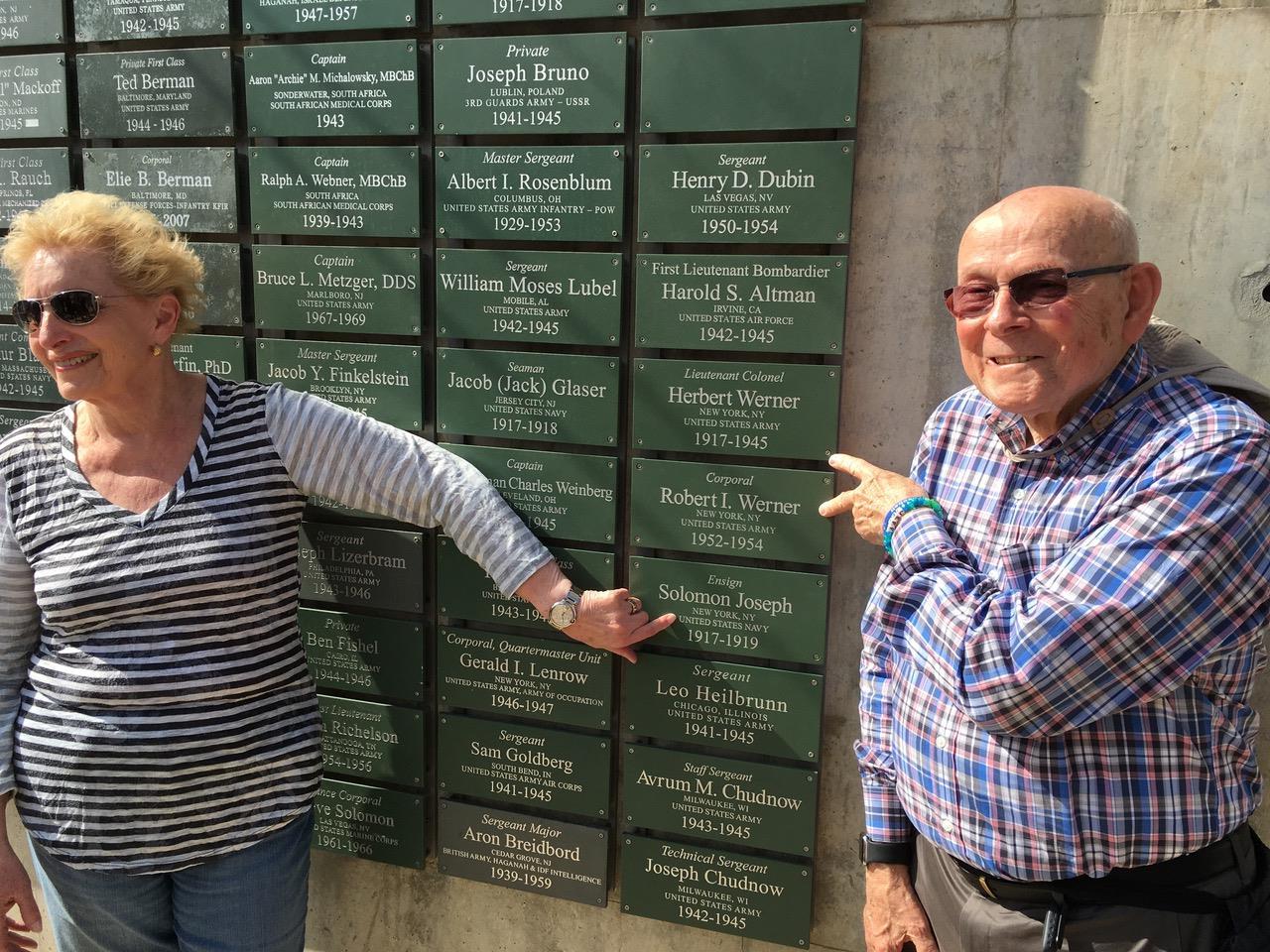 Bob Werner was a Sr. Vice President of the Werner Company for over forty years, the world’s leading producer of climbing products. Mr. Werner applied his expertise in metallurgy and chemistry in developing new alloys, forms and process greatly expanding the company’s product line and safety of products. Bob is a veteran of the Korean war where he applied his engineering skills developing assets to support our military operations. Bob and his wife Florence (z"l) are Alum of the AMHSI-JNF adult seminar, and parent and grandparent to AMHSI-JNF Alumni. Bob has served as board Chair for AMHSI-JNF, Israel Tennis Centers, Beit Issie Shapiro (Ranana). Bob serves on the Miami Dade Federation finance committee and is Current AMIIE Board member and secretary. Bob resides in Aventura Florida.

Ron Werner (Denver, CO) is President and Co-founder of HW Home, Inc., a Colorado-based home furnishings retailer and design source. Ron grew up in the Chicago suburbs and now calls Denver home. Prior to forming HW Home in 1998, Ron was a Senior Vice President of Investments with Smith Barney. Ron serves on various boards including Alexander Muss High School in Israel, for which he serves as President and was previously Vice President and Chair of the Sales & Marketing Committee. He is also a proud alumnus (1982) of the school. Ron is Co-chair of JNF’s Nefesh B’ Nefesh Task Force. He served as President for the Mountain States Region from 2014- 2016, and now is the region’s chairman. He is a member of JNF’s Century Council and Solomon Society.

Jerry Sokol is a partner with the international law firm McDermott Will & Emery based in the firm’s Miami office. Jerry is a corporate attorney who deals primarily health care transactions. He is ranked in Chambers USA, listed as one of the best lawyers in America, and is on the Lawyers list. He is also on the Nightingale’s best Transactional attorneys list. Jerry is involved in many charitable organizations including a board member of the Alexander Muss high school in Israel and is a past Founding President of the Miami Beach Jewish Community Center. Jerry spearheaded the historical effort of building a new JCC in Miami Beach. Both Jerry and his wife Allison are AMHSI-JNF alum and are proud parents of Alumni as well.

Bob Levine (Teaneck, NJ) is a senior partner at the New York City accounting firm Levine Schaeffer Fink & Moss, P.C., and has a personal law practice as well. Bob has served as President of his synagogue, as Chairman of the Board of the American Zionist Movement, and Treasurer of Mercaz, the Conservative movement’s Zionist organization. Involved with JNF since 1968, he has held a number of leadership positions including National Treasurer, Vice President of Campaign, and has chaired the Budget and Finance, Labor Relations, and Missions Committees. As a mission leader, he has brought over 650 individuals to Israel to see the country through JNF’s eyes. Bob was the recipient of JNF’s 2010 Gould Legacy Society Heritage Award and is a Negev Society and World Chairman’s Council member.

Jackie Danilewitz is originally from South and now resides with her husband and family in Haverford, PA.  Jackie sits on the JNF USA Philadelphia Board, is the JNF Women for Israel chair in Eastern PA and is a Sapphire Society member.  Jackie is a proud parent of an AMHSI-JNF alumnus (2015), and served on the AMHSI-JNF Alumni Committee and sits on the AMHSI-JNF Board of Directors.

Karl Kaplan – (Mahwah, NJ) is the Managing Director of The Timna Group, LLC, a New Jersey-based investment firm founded in 2009. Karl co-founded OSG Billing Services in 1992 and served as the COO until 2013. Karl serves on the boards of Green House Data and Nymbl. Karl has been active in JNF since 1997, a past member of the JNF of Greater New York Board of Directors, and a member of JNF’s Century Council. Karl’s interest includes education and the next generation.  Karl is married to Tracy and they have 3 children.  Their eldest Jack is an AMHSI-JNF Alum of the 2018 Fall Semester session.  Karl serves on the AMHSI-JNF National Marketing & Sales Committee and is Chair.

Susan is a native of Long Island, New York. She attended Jewish summer camps throughout her youth as a camper and later becoming a camp counselor. Susan earned a BS in psychology and education from SUNY Oneonta, as well as an MSW from Hunter College in NYC.  She spent her professional years as a school social worker at a university campus and in Human Resources for a financial institution.

Susan is an active leader in the Chicago Jewish community.  She is passionate about partnering with organizations whose core mission is to engage Jewish teens centered around Israel, experiential education and contemporary Jewish Rock music.  Susan serves on the board of directors JUF/JF Board of Chicago with on community engagement, family services teen education.  She is also a trustee of the Chicago Jewish Women’s Foundation and is an active member of the board of directors of JewishRockRadio.com.

Most recently Susan and her husband Marc were of the Jewish National Fund Chicago 2018 interfaith mission to Israel.

Susan is very excited to join the AMIIE-AMHSI national board, where she can combine her passion for Israel, education and teen engagement. Susan, Marc their 3 sons live in the Chicagoland area.

Lori Miller is a Michigan native with deep roots in the Phoenix Jewish Community. She is excited to shift her focus from being a parent of an AMHSI Impact Fellow, (Hannah Miller, Summer 2017), to an AMHSI National board member helping to position AMHSI for the future.

Lori graduated from of Illinois College of Law and was a practicing attorney for ten years. She and her family lived in Tampa and now Phoenix, where she has been active in both Jewish communities as a volunteer and lay leader. She was also an active board member of the American Diabetes Association both in Tampa and Phoenix for many years. Since 2010, she has dedicated her time to leading initiatives for the Phoenix Jewish Community. Her most recent involvement includes serving on the Phoenix Jewish Federation Women’s Philanthropy Board and Chairing the 2019 Women’s Ignition Luncheon. Lori is passionate about Swift Youth Foundation and has led fundraising initiatives for the organization. Additionally, Lori has been a lay leader, volunteer and event host helping the Jewish National Fund Phoenix team with many initiatives.

AMHSI has been a part of Lori’s life for many years; coincidentally, her brother was an instructor there in the after he made Aliyah. Lori travels to Israel often and is committed to educating our youth about Israel and its rich history to prepare them for leadership roles on college campuses and beyond. She has most recently channeled her passion for developing the next generation of leaders by helping local teens navigate the complex college application process.

A leader in the communication and media planning space for over twenty years, Alison is the President of L’Equipe L’oreal and Executive Director of their Wavemaker content and technology agency. Alison has proven especially adept at consumer-centric, touch-point agnostic, communication planning, stemming from her “consumer needs”-based philosophy. She also has an uncanny knack for conveying otherwise complex media stories in a digestible, succinct, and compelling manner. She lives in New York City with her husband, Dan. Alison is a 1991 alumna of AMHSI-JNF, serves on the Strategic Planning as well as the National Sales & Marketing Committees.

Stephanie Kelman (Portland, OR) oversees global product creation for kids apparel Nike, Inc. Following a strong family lineage of JNF leaders, Stephanie is passionate about growing the future leaders of JNF.  She is inspiring future generations to actively ensure Israel’s existence and not take the Jewish homeland for granted.  She is the founder of JNFuture’s Arizona chapter, where she spearheaded the creation of JNFuture Shabbat in the Desert. Along with participating on several JNF missions, she chaired the Young Leadership track of the 2017 50th Reunification Tour.  Stephanie has served as of JNFuture’s National Board and JNFuture Chair for the 2016 and 2017 National Conferences.  She is a proud member of the Nefesh b’Nefesh Task Force, Women for Israel’s Chai Society, and JNFuture’s Root Society.

Ellen Kelman is a licensed psychologist with a practice in Scottsdale, AZ. She has been in private practice for about 25 years. She works with age six and up, as well as with couples and families. She has a great deal of experience with children and adolescents.

Ellen has served on Jewish National Fund's Disabilities Task Force and is a member of the Saphhire Society. She is also the Volunteer Adult Program Director for Stepping Stones of Hope, which runs programs for children and their families who are grieving. She has volunteered with Healthrights International, conducting psychological evaluations for immigrants seeking asylum, both adults and children.

Wendy Miller was born in Baltimore, where she continues to reside. She graduated from the University of Maryland School of Nursing 1984. Wendy has held several leadership positions within her community including the Beth Tfiloh Dahan Community School board, the Beth Tfiloh Congregation Board, Chair of Israel Bonds of Maryland, Women’s Division 2013-2015, Chair of The Associated: Jewish Federation of Baltimore,  Associated Women Campaign in 2018, and a National Women’s Philanthropy board member, JFNA, since 2018. Wendy is also on the Baltimore Regional Board serving as the Muss Chair. Wendy is married to Dr. Jeffrey Miller for over 33 years and have three children.

Joel Reinstein is an attorney, originally from the United States, residing in Israel.  Joel sits on the Board of Governors at Ben Gurion University and is a supporter of Yerucham. Long time AMHSI-JNF supporter, lay leader, parent and grandparent of 2 generations of alumni.  Continued as AMHSI-JNF Board member as part of the 2013 AMHSI-JNF merger, former Chair of Alumni Committee.

Jack Roldan is the owner and founder of See Deep Consulting, a customer experience and digital agency. Born in Denver but raised in Southern California before returning to Colorado, he is a champion of higher-education, personal development and philanthropic endeavors positively impacting individuals and communities. From leading young professionals on a JNFuture mission to engaging the local Denver Jewish community as an active Mountain States Regional Board Member, he has a passion for philanthropy, people and Israel and is a member of JNF's President's Society.