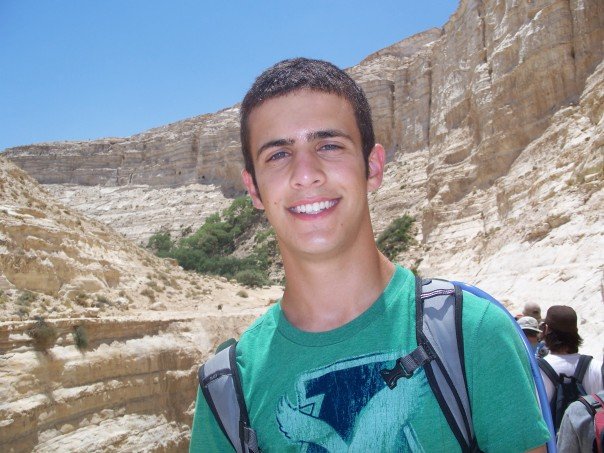 Click-clack. The patter of the feet grew restless as we made our way through the graves. The bright, sunny weather eerily contradicted the somber mood of the group. We were a group of Jewish American teenagers standing on Mount Herzl in Israel. This is the site where countless young Israelis that died protecting their state are buried, where prime ministers lie beside Jewish resistance fighters from the Holocaust. As I looked around Israel’s military cemetery, I saw that it was a far cry from the long, anonymous fields I was so used to seeing in America. Each tombstone had a name, military decorations, and flowers. It was almost like a surreal park where the presence of those who died could be felt in the land where they died protecting and upholding it. Row after row, stone after stone, war after war all became endless cycles of names and dates.

As the summer of 2007 approached I hesitantly left my familiar surroundings in St. Louis and got thrust into the Alexander Muss High School in Israel (AMHSI) program. I had argued with my parents for months about choosing a different summer activity. In hindsight, going to AMHSI was the best decision I made. I enjoyed new experiences and met people from across the United States. As the weeks flew by, I felt myself becoming more and more enthralled with my heritage and history. I heard stories about Jewish heroes from 2,000 years ago to today. Seeing the places where the first Israeli pioneers settled in a desert once thought inhospitable stirred up feelings of pride. As I talked to everyday Israeli citizens about what the country means to them, I became further connected to the land and people of Israel.

As we meandered through the streets of Tel Aviv, my group was assigned the task of asking local people their thoughts on living in Israel. I decided to go up to an elderly man and ask him for his opinion. What he had to say led me to realize what was so special about Israel.

“Although it is not entirely the same country it was 50 years ago and there are numerous problems now it is still the only country we have,” the old man replied in Hebrew with a thick Yiddish accent. “After years of oppression we Jews finally have a place to call home and it is thanks to many brave people that it has happened.”

It then dawned on me that this place I had come to every summer for vacation had a much deeper meaning than my superficial view of beach and fun. It was a collective of the dreams and hopes of generations of less fortunate Jews. They were kicked around from area to area until they stopped taking the abuse and did something about it. They created their own little niche in the world and put in much time and effort to see the country succeed.

During Israel’s short history wars were not for the sake of having a war. The wars were essentially for the survival of the Jewish state and people.  I later understood that with a relatively small population and area everyone in Israel feels a connection to a fallen soldier or victim of terrorism, whether or not they actually knew them personally. As the summer passed, my memories grew abundant from hikes in the desert to snorkeling in the Red Sea. No sight was left unseen and I felt my understanding of the Israeli situation was better than it was before. However, the most emotional experience was on the last day at the military cemetery of Mount Herzl.

As we were walking around the cemetery our teacher began to tell us all sorts of stories of brave soldiers who died in combat. One grave he showed us belonged to 31-year-old Roi Klein.

“This man fought in the second Lebanon war in 2006. What was heroic about him was that he spotted a grenade thrown at the soldiers of the unit under his command. He threw himself upon it to protect them and died with the words of the Jewish prayer, ‘Shema Yisrael,’ on his lips,” the teacher explained.

I could not imagine the split-second thinking that Roi experienced in order to save the lives of his men. I found myself standing there bewildered, asking myself if I would have done the same thing in that situation. My stomach began to turn when I realized that in a country with perpetual conflict and soldiers not much older than I, it was not such a far-fetched dilemma.

Then we moved on to another fallen soldier from the same war, Michael Levin, who was 21 when he died. He was an American from near Philadelphia who decided to join the Israeli army because he believed that it was his duty to protect his people. He fell in love with Israel and decided to enlist in the army for personal reasons. What I thought was amazing was his willingness to fight for a country that might not necessarily be his by birth, but by birthright.

Standing around his grave, gazing at his tombstone I realized everyone buried here had a common link connecting them all together. They all thought it necessary for Jews to have their own country where they could live freely, without the threat of anti-Semitism or xenophobia. Furthermore, they gave their lives for the cause. It was at that moment that I felt included in that link, that I was part of the chain of the Jewish people believing in the legitimacy of the State of Israel.

I looked around and got goose bumps from this new revelation. The first sight I laid my eyes upon was the city of Jerusalem. The busy traffic of people and cars and the numerous cranes signifying construction throughout the city gave me a quick chill. The liveliness and activity of the city was overwhelming. I felt I could barely stand up and my arms were slowly trembling. This is what these warriors died protecting. The survival of the country was entirely dependent on them, down to this very day.

As we left the cemetery and boarded the bus, I took one final look at the gates. I felt like I needed to do something, but I was not entirely sure of what I could do. So I decided to leave my parents a message on their phone.

“Hey, it’s Alon,” I started. “Even though I will see you tomorrow I just wanted to apologize for giving you all of the trouble for sending me on this trip. It really opened my eyes to bigger and more important things and I feel so much more connected to Israel and I am thinking about one day moving back here.” With that I hung up the phone and boarded the bus. The power and magnitude of that day was carried with me all the way back home.

Original article in The Jewish Week News published on December 18, 2007.