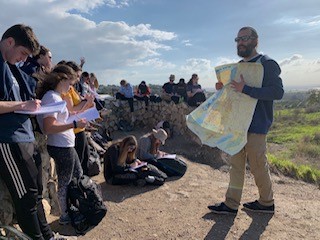 One of the many things I love about taking AMHSI students out on tiyulim is the fact that no matter where we are going in the country and no matter what site we are visiting, there are always layers of history to discover and discuss there.

When we go to Mount Gilboa to learn about the time period of the Judges, like Gideon and Deborah, I tell my students that I can’t bring them here and only talk about that because there are other interesting and important stories from other time periods that can be told here as well.

I tell them about the early Jewish farming villages that were established in the Jezreel Valley down the mountain in the decades before the official creation of the State of Israel and the role they played in the success of Zionism.

I walk them up to the very top of the mountain where they can look southwards into the northern West Bank and I can introduce them to certain contemporary issues like Palestinians, the Green Line, the security fence, and Israeli settlements. These are issues that we will more deeply delve into later in the program but I don’t want to miss out sharing with them the powerful visual that the top of Mount Gilboa affords them, a visual that can help them understand these issues better later on.

Another example of these layers of history is the City of David.

We take our students there to learn about King David, his conquest of Jerusalem, and his making Jerusalem the first and eternal capital of the Jewish people. Of course, we walk through the cold waters of Hezekiah’s tunnel also!

We observe the incredible archaeological digs there and talk about the artifacts and structures that have been found (like King David’s palace and ancient clay “stamps”) that are being used by archaeologists and historians to better understand the stories from the Tanach.

But it doesn’t stop there. There’s more to talk about in the City of David than just ancient history.

From one of the rooftops in the site you have a spectacular view of the Al-Aqsa Mosque, which provides an opportunity to briefly talk about Islam and Jerusalem.

Turn 90 degrees and you are looking down at the East Jerusalem Arab village of Silwan, opening up the door for a short introduction to East Jerusalem Arabs, Jerusalem and the Green Line, and the history of Silwan itself, including small groups of Israelis now moving into this all-Arab neighborhood.

Again, these are topics that we delve into greater detail about later in the program, but why not begin the conversation here while we’re literally standing in the middle of it all? These visuals will also help students better understand newspaper articles covering these issues that we will look at when we discuss current events back in the classroom.

These layers of history are some of my favorite things to share with students. To not only show them how the story in Israel goes back thousands of years, but how the story is made up of multiple chapters from many different time periods, up until and including the modern day story of the Jewish people returning home.