The first part of the hike was all down hill... 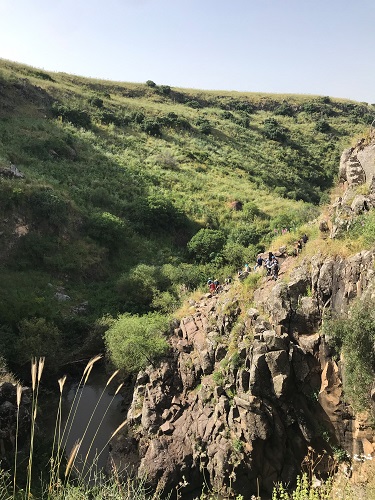 This was such a fun tiyul! On Tuesday, the first day of the tiyul, we started the day by driving to Tel Facher and learned about the amazing Eli Kohen. We learned about how much of an inspiration and incredible person Eli was. I had never heard his story and I found it so fascinating how good of a spy he was and how committed he was to Israel. We then rafted on the Jordan River. It was so fun jumping into all the different rafts and hanging out with everyone. The river was so calm and it was so so beautiful. I had so much fun with my friends and also being in the water. After rafting, we visited the Naot factory and that was really cool. We then went to the border of Israel and Lebanon and it was really interesting swing how just one fence can separate two completely different countries. Aubrey told us how the houses and buildings we saw on the Syria side were a fake and a cover for the Hezbollah.

We then drove to the Kibbutz to have dinner and then have a super fun dorm activity. The next morning we woke up early to start the day with an early breakfast. After breakfast we went straight to the hike in the Golan Heights. The first part of the hike was all down hill but then once we reached the bottom, there was the most beautiful waterfall. The water was so so cold but we all just jumped in and went into this crevice in the rocks and stood in the waterfall. The waterfall was so magical and so so perfect. We then hiked all the way back up and had lunch. After lunch we went to the border of Israel and Syria and sat on a tank. This was the first time I had ever seen a tank in real life and learning about the Yom Kippur War sitting on the tank, made the story come to life. We heard about 3 different amazing hero’s in the war and I really enjoyed the stories. We then had Dots and then a class activity. The activity was really good because I think we all needed it. This was a really fun tiyul. - Dahlia